Home / Blog / What is MongoDB?

MongoDB is a Document-oriented database. And is in the NOSQL database group.

In this type of database, there is no table and record and collection and document are used. It can be said that the set looks like a table and the document looks like a record in a relational database.

In this database, the data does not have a fixed structure, and both documents (similar to a record in a relational database) can have a completely different structure, this type of structure is called a BSON. For example, two documents from an entity in this database might look like this:

What is BSON? MongoDB stores data in json format. This structure is called BSON in Mongolia. The structure of BSON is as follows. 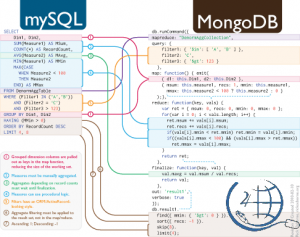 Higher processing speed: The relational database in each search or in each data store must examine many conditions such as the relationships between tables and the accuracy of record values, which greatly increases the RAM and CPU overhead, while MongoDB due to the NOSQL structure only It stores and searches, and as a result, the speed of accessing and storing data is drastically reduced.

Higher data storage: Databases can increase the amount of data that can be stored in the system in two ways. horizontal-scaling and vertical-scaling.

1. vertical scaling: In this method, the data is stored on a node and to increase the data volume, we increase the RAM and CPU or Hard Disk (hard disk). One of the databases that use this method is MySQL.
2.horizontal-scaling: In this method, the data is distributed on different nodes, and each piece of data is stored on one server, thus the processing load will be distributed on different servers and the speed of data access and the amount of stored data will be increased. Databases that use this method can be called MongoDB and Cassandra.

As mentioned above, in MongoDB you can master the amount of data that can be stored as well as the speed of data access by mastering horizontal-scaling called shard.

To study: What is Docker?